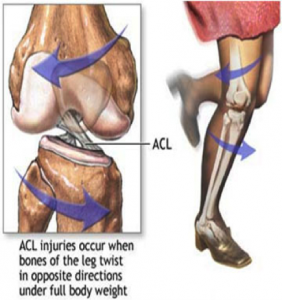 When looking at the prevalence of ligamentous knee injuries, one may be inclined to believe that these types of injuries tend to occur more often in males. While it may appear this way based on the media that goes hand in hand with elite level sport, this isn’t the case. A study by Myer et al have shown that women have a 4-6x greater chance at injuring their anterior cruciate ligament (ACL) than their age and skill matched male counterparts.
So why is it that women have a greater risk of such a devastating injury? The evidence points to a myriad of potential causes which influence the knee and how it receives and transfers force:

• Hormone levels: Low-level evidence supports the phase of menstrual cycle contributing    to ACL ruptures in females. Beynnon et al investigated the rate of ACL rupture incidence in female skiers as it related to phases of their menstrual cycle and the study found a significant difference in likelihood of rupture of the ACL in women who were pre-ovulatory compared with post-ovulatory.

• Muscle imbalances and neuromuscular control: A strong body of evidence exists to support muscle imbalance between the quadriceps and hamstrings as a major contributing factor to ACL rupture in females. When the hamstring muscle group has less than 55% strength of the quadriceps group, a poor strength ratio occurs. It is also stated that ligament and leg dominance, where an athlete relies on ligament instead of muscle for joint support or has one leg stronger than the other, may also contribute to the likelihood of ACL rupture.

• Joint torsion and stiffness: Studies have shown that the female knee has a greater amount of joint laxity through rotation as well as less muscular protection from forces going through the knee joint.

Fortunately, there are evidence supported preventative strategies that can be put into place to help prevent these injuries from occurring. These strategies aim to correct muscle imbalances and biomechanical errors. This is usually done through close analysis of jumping and sporting biomechanics, and a strengthening program usually with a plyometric emphasis A study by Mandelbaum et al showed that these types of programs can offer a significant reduction of 88% in the occurrence of ACL injury when implemented by sporting clubs.

If you’re interested in learning more about strategies to reduce ACL injury in your sporting club. Give Physiohealth a call today.