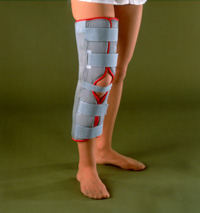 In acute compartment syndrome, muscles in the arms, hands, legs and buttocks are affected. Swelling and/or bleeding within the compartment puts pressure on the capillaries, causing them to collapse and in turn disrupting the supply of oxygen and nutrients to the cells. One cause of compartment syndrome may be in the wearing of a cast or splint. It is normal to have swelling for a few days after being fitted with a cast, but you should call your doctor if you have a lot of swelling below your cast and it feels too tight. The cast would have to be cut to relieve the pressure. Other causes could be severe trauma to a muscle during sports or through a vehicular accident, complication after surgery, or anything that impedes circulation during sleep.

The most common symptom of acute compartment syndrome is pain that is out of proportion to the injury. A tingling or burning sensation (paresthesias) in the muscle may be present. Numbness or paralysis in the limb may signal that cell death has begun and it may be difficult to restore function. A feeling of fullness or tightness in the muscle could also be a sign of compartment syndrome.

Once the doctor has ruled out other conditions that may cause pain in the lower leg (such as stress fractures of the tibia and tendonitis), she will proceed with treatment. For acute compartment syndrome, surgery may be necessary to relieve the pressure in the compartment. If surgery is not warranted, the doctor may advise avoiding the activities that cause the condition, icing and elevation of the limb, the use of aspirin or ibuprofen to relieve inflammation and wearing shoes with a cushioned sole in them.

Shin splints are often confused with chronic compartment syndrome but your doctor can only determined the difference after specialised tests.