What is Scapular Dyskinesis?

Scapular Dyskinesis is the alternation of normal scapular movement and position; ‘Dys’ (alteration of) ‘kinesis’ (motion). Other terms are Scapular Winging and Scapular Dyskinesia (term relating to neurologically controlled factors such as damage to the Long Thoracic nerve). It is important to note is that dyskinesis by itself is not an injury or a musculoskeletal diagnosis (Wright et al).

What is the Scapula?

The scapula plays a major role in shoulder positioning, motion, stability, muscle performance and motor control. It is an irregular shaped bone situated on the back of the rib cage and connects the arm to the rest of the body. Providing a stable base of support of movement of the arm.
Scapula stability is needed for production of force from the muscles arising directly from the scapula. As the shoulder joint is highly mobile it is important that there is effective coordination between the scapula and the humerus (upper arm bone) to allow efficient movement to occur. 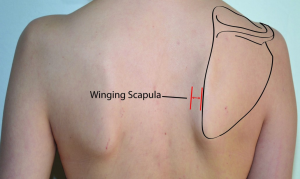 During throwing and serving tasks, the scapula is the pivotal link between the larger centralised body segments that produce stability and generate force and the smaller localised segments of the arm that produce mobility and apply force to the ball or racquet. It is the link within the kinetic chain which allows the transfer of energy from the pelvic and trunk muscles to the overhead moving arm (Kibler et al 2013).

The main aim of all throwing sports is to throw a ball or object; accurately, for a great distance or maximum speed.

A common misconception with those learning to throw is that the power is developed at the arm. However, as athletes progress, they learn that throwing requires the whole body to create the power starting from the feet all the way to the fingertips when the ball is released. As you can see in the photos below of a bowler and pitcher there is windup phase prior to the release of the ball. This windup is where the power is created and the force is then directed up the kinetic chain to the release point at the fingers. When there is a break in this kinetic chain there will be a decrease in performance or increased loads further down the chain to make up for the loss.

A common place for this kinetic chain breakage is the scapular. When there is poor scapular stability the force is not effectively transferred. Often the result of this is a pain in and around the shoulder. Scapula dyskinesis is associated with:

• Referred pain from the shoulder and neck

Optimal rehabilitation of scapular dyskinesis requires addressing all the causative factors that can create the dyskinesis and then restoring the balance of muscle forces that allow scapular position and motion (Kibler and McMullen, 2003). Causative factors can be grouped into:

3. Bone factors such as clavicle and scapular fractures

5. Muscular factors around the scapular with weakness and hyperactivity of different muscles

6. Kinetic chain factors such as hip/leg weakness and core weakness.

As treatment of scapular dyskinesis is multifactorial, understanding the underlying causative factors is important. A Physiohealth Physiotherapist will help create a bespoke rehabilitation program that addresses your specific causative factors.